What are the Flint Hills?


The Flint Hills is a unique tallgrass prairie ecosystem found in central North America centered on Kansas and northern Oklahoma (where they are known as the Osage Hills). It is a tallgrass prairie, a type of temperate grassland, marked by few trees but abundant forbs and grasses that can grow up to 10 feet tall. These same plants have roots that grow up to 15 feet deep, tapping into limited groundwater. Naturally occurring prairie fires and cycles of drought meant only the hardiest plants and animals evolved to survive in the Flint Hills.

Unlike other tallgrass prairies in North America that contain deep soils, most of the Flint Hills has very shallow soil. An ancient inland seaway that covered central North America starting 290 million years ago deposited alternating layers of hard limestone and softer shale rocks. The actions of erosion in recent geologic history have created the jagged 'step-pyramid' look unique to the slopes of the Flint Hills. These surface layers of limestone and chert also stopped the settlers plow and preserved the integrity of the soil.

The first humans who set eyes on the Flint Hills encountered a wetter and cooler place than today. Humans arrived at least 13,000 years ago to find abundant hunting grounds with ice age mammals. As the local climate warmed and dried, later cultures adopted farming techniques to raise crops like corn and beans in the rich river bottomlands. 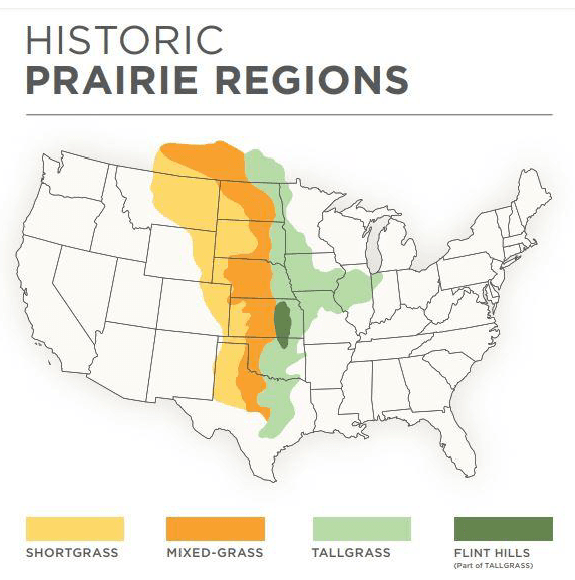 At one point, 150 million acres of tallgrass prairie stretched from Texas to Canada. The majority transformed into the agricultural heartland of America through 200 years of settlement and development. American settlers carved up the tallgrass of Illinois, Iowa, Nebraska, Minnesota and the Dakotas. Their harvests fed a growing nation and world. But, the Flint Hills would follow a different path.

When U.S. Army Captain Zebulon Pike passed through this area in 1806, he wrote in his journal, "passed very ruf [sic] Flint Hills," putting a name to this unique region. When Euro-American settlers arrived in the 1850s, they struggled to farm the land because of the overabundance of rock in the soil. Observing the healthy bison on the land, they began to herd cattle, which like the bison, fattened quite easily on the rich prairie grasses. With cattle driven up from Texas and the introduction of barbed wire, ranching boomed into a huge business, making it a staple in the Flint Hills to this very day.

Today, only 4% of the original tallgrass prairie ecosystem survives, the largest piece being in the Flint Hills. Threats remain to this ecosystem. Introduced plants and animals compete with native ones. Land owners continue to plow up untouched soil. Fragmentation of land threatens species like prairie chickens that require large scale intact prairies.

The Flint Hills Learning Center exists to educate and inspire the next generation of land stewards. Only by reaching our youth can we instill in them a pride of place and love of landscape. Because in the end, the path to protection passes through the hearts and minds of everyone who has set foot in these hills, past, present, and future.

Did you know...?
Become
A Member
Volunteer
With Us
Support
Us
Register
For A Class
Sign Up
For Emails
[]